To round of the #3 part post-Thunda-launch series, it seems fitting to tip the hat in the direction of those successfully funded champions of trade. From bikes that shift shape right before your eyes to trips that’ll take you on a magical journey of change, I present you with the success Thundafund crowdfunding stories of 2013.

This is an exceptionally long entry so grab a cup of coffee and keep reading – the point is to illustrate how many projects made it through the initial pipe of approval and are making their way towards greater success. This is why crowdfunding is a good thing, this is what the hype is all about:

The terrific three Matt, Tracy and Ishtar take to the road on a garden-planting African exploration of life below the breadline.

They have reached a bit of a hurdle, even though their initial target of R13 500 was reached with an additional sum to total R61 150, as per their recent Facebook update, and I quote –

“We’ve been a bit quiet in the last week because a) we have been mourning the father of our nation b) we have hit a bit of a roadblock on our expedition. Essentially we have realised that the budget for our expedition was not big enough and we have gone through it twice as quickly as we expected. As such we have been forced to pause for a month while we raise more funds. Ishtar has flown back to SA to work on this there, while Matt & Tracy have remained in Nairobi to work on this issue from there as well as take care of the car. We are confident that we will resolve this by mid-January when the team will be reunited and then continue on to South Sudan. We knew that such an expedition would be full of challenges and are more than ready and willing to overcome these to ensure this journey we are so passionate about will continue. The rains in the DRC have continued later than expected too making this area impassable at the moment and so we are sticking with the ‘Everything happens for a reason’ line:) Any fund-raising suggestions or contacts would be most welcome!”

Follow their trip and see what they’re getting up to and how you can help: www.t2tafrica.com. 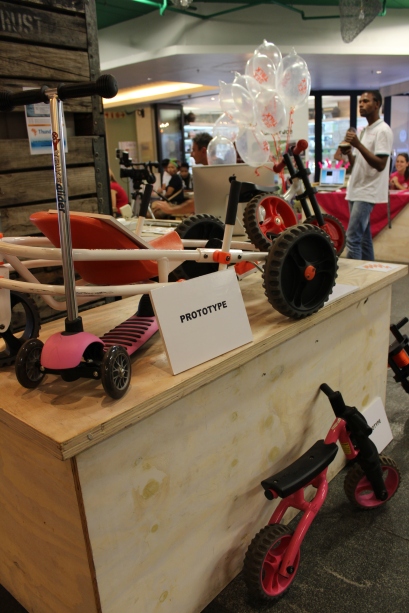 And indeed they are evolving at a rapid pace. Initial funding focused on releasing a tricycle that is adaptable to a bicycle, aimed at improving the transition of the balancing act in young children. Now they have upped the game to include a range of scooters – pretty impressive.

With their first milestone set at R30 000, they managed to acquire a whopping nine grand over and above what was aimed for. It is no surprise; most parents should, would and did jump at the chance to give their kids a head start to the development of motor skills.

If yyou have not had a chance to check out this awesome concept yet hurry up: www.ybike.co.za.

Officially recognised as one of the World Design Capital projects: #WDC207, Open Streets are taking to the, well, streets with the brilliant concept of creating an open community thriving on respect, creativity and unity.

Milestone one for them focused on opening a stretch of 500 metres in Lower Main road, Observatory. The general idea is that when streets are open to all but cars, people are free to share, interact and gain a greater understanding of each other’s diversity.

Sometimes all that is needed is a space in which to spend some time, communal places like our streets seem like the perfect spot for such engagements.

Utilizing the remains of a historical bowling green, Wild Spaghetti is setting up a suburban farm and needed help in funding the capture of the early worms.

They were magnificently successful, another project to raise almost 20 grand over and above their initial milestone. Why? Because everyone needs to eat and since we are all ‘going green’ there is little reason not to want to partake in a project that pushes the boundaries of farming from rural to cityscapes.

Visit their Market on any given Saturday at Homestead Park for ‘green’ groceries and other goods.

While we’re on the topic of visiting, go see their site: www.ozcf.co.za.

The Cape Dance Company came into existence in 1995, starting off as a youth dance company. Since then it has transformed into a ‘project based professional neo-classical dance company’ and as you might well know, the arts are prone to be in need of cash for the sake of creation.

Their goal was to acquire the funds to bring South African born, European choreographer Belinda Nusser in to create a new work for 2014.

They reached their goal with awesome rewards such as invites to dress rehearsals and top-notch seats at the Gala.

Further works will always need your support, so go have a look at how you can get involved to ensure that this company of dance carries on producing beautiful ballets: www.capedancecompany.co.za.

The members comprise students from townships who needed their flights funded and they made target even though they only had ONE WEEK to gather the money. Pretty cool, eh?

These forward thinking guys reached their first milestone within one week of launching with Thundafund.

Vertical gardens (potted plants in ‘n wooden box conducive to wall mounting) aim to provide those without garden space with, well, garden space.  Of course this product is not limited to indoors use, it can put a spring in the step of any outside garden as well and serves as a great piece of eye-catching greenery.

There’s a lot more information available on their website, as well as beautiful pictures of their products. Go check it out: www.mooibos.co.za.

Inspiration is the aim of the game. Young leaders are the focus and creativity the method. A one day event hosted at the Khayelitsha Multipurpose Hall showcased the unboxed ideas of 200 people in the form of workshops and talks.

It is this event that needed your help and saw success in being funded. This is a movement worth following and contributing to – changing the way we look at leadership, social issues and solutions plays heavily into the brighter future South Africa is in need of.

Part three of the Montverdi Porject: Anticipating the Apocalypse took a look at the final doings of a young man on the day before the end of the world.

They’re bringing Baroque back with flair!

Hand Made by Me – Bring it Home!

Sera Holland wanted to localise and so she did. Reaching her first milestone geared her up to buy the material for her cushions and other goodies locally instead of having to rely on imported goods.

This in turn helps out the local textile industry, we can all agree that local is lekker and lend her a hand of applause for opting for the wiser choice.

It’s certainly the right thing to do!

Have a look at her blog for updates on her latest designs: www.handmadebymeblog.com.

Imbiza Productions are looking into the life and times of one of our most notable artists and musicians, Taliep Peterson and with your help, they are preparing for lights, camera, action!

“Tragically, Taliep Petersen’s body was found on December 16, 2006. While the media has scrutinized every aspect of his heinous murder, little attention has been paid to his illustrious life.”

With that in mind, their aim is to pay tribute to his life and document the man behind the name.

Get in on the action: www.imbizaentertainment.com/projects/seven-steps.

The Resurrection of Poetry – Siki Dlanga: 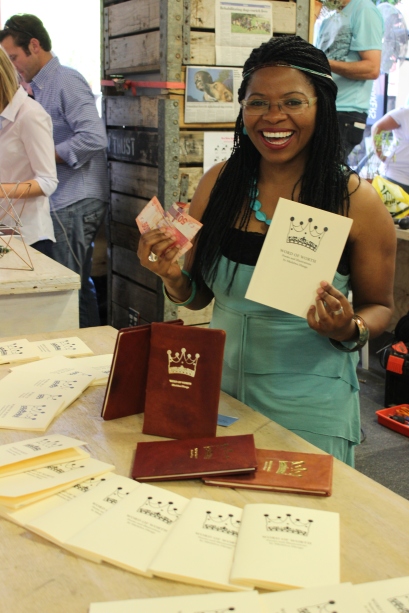 Siki Dlanga, poet of perseverance, was able to launch her book of poetry by receiving more than double the amount she initially aimed for as her first milestone.

Standing firm behind the notion that poetry is not dead she not only wishes to publish her own works, but also to inspire other poets to stand up and let their voices be heard (or as the case may be, their words be read).

With the incredible support she has received it is clear that she is quite right, poetry is alive and well and still a respected and necessary medium of expression.

You can find her blog and see what she’s getting up to here: www.sumofconversations.blogspot.com. 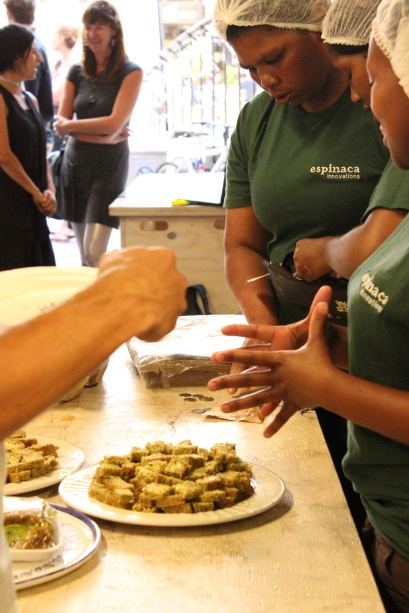 Espinaca (spinach in Spanish) is the fresh idea of Lufefe Nomjana who was inspired to change his and others’ eating habits from careless to healthy.

He is an entrepreneur, baker and the founder of Espinaca: a catalyst for change in his homebase Khayelitsha. With his great attitude and boundless energy, Lufefe is another candidate who saw double his target reached.

The funding enabled the team to gear up their delivery system from an on-foot approach to a bicycle powered machine of excellence.

Find him on Facebook and show your support – also, get your hands on his baked goods, they are delicious, wholesome and nutritiously packed with all his great intentions.

Behind the Faces – Celebrate the Stories: 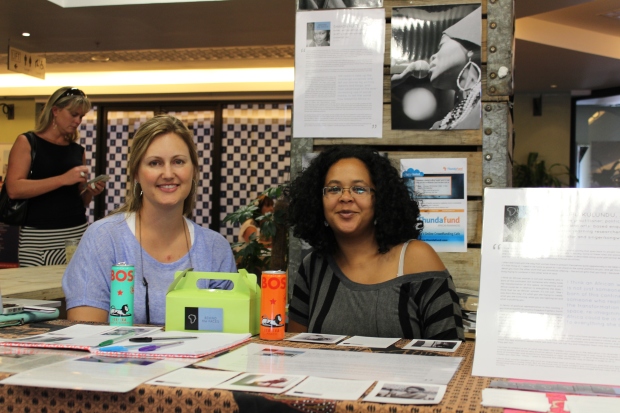 Let’s face it; women are still to a certain extent lost in the maize when it comes to recognition. The forerunners of science, arts and industry are men, or so we have been led to believe. The fact is that both men and women are contributors in the global quest for progress and excellence.

Yes, women are considered equal to men these days and that is wonderful but Behind the Faces is a concept that aims to take that equality a step further, to pay homage to the women who actually fill the shoes previously ascribed to ‘boys only’.

How? By telling their stories:

“ Storytelling is one of the most powerful forms of communication. It is an intrinsic part of our humanity, a way of conserving our history, and of transferring our moral code from one generation to the next. The exchange of information shapes and moulds who we are as individuals, and as a culture. Communication is an essential human need – and, therefore, a basic human right.”

With their first milestone reached, they are getting ready for the Behind The Faces photographic exhibition in 2014.

Find out more at www.behindthefaces.org.

Brydon Bolton, Ross Campbell and Alex Bozas form this improvising trio from Cape Town. Yes, you read right, they improvise which makes each of their performances unique and interactive. They captured some tunes for their fifth album and needed help to release said recordings online.

Further funding will help them print some CD’s, so go on and see if you can lend a hand. Further information can be found on their website: www.benguela.co.za.

Teach a man to bake…

Taking to the Nkanini Community of Khayelitsha, BREADrev’s aim is to set up micro-bakeries using their wood fired rocket oven.

Partnering up with A Reaching Hand who runs a soup kitchen, this project aims to empower and feed the community.

Their first milestone set them up to supply a 30 loaf oven and train three members of the community in the art of baking bread.

See how you can help further the cause: www.breadrev.com.

And that’s a wrap, folks. For the sake of brevity I’ll keep the concluding sentence minimalistic: so many success stories left no option to keep this short and simple. Keep your eyes on thundafund.com – great things are rolling in and lining up for 2014.

There was an error retrieving images from Instagram. An attempt will be remade in a few minutes.